The Sport of Kings – The History of Surfing 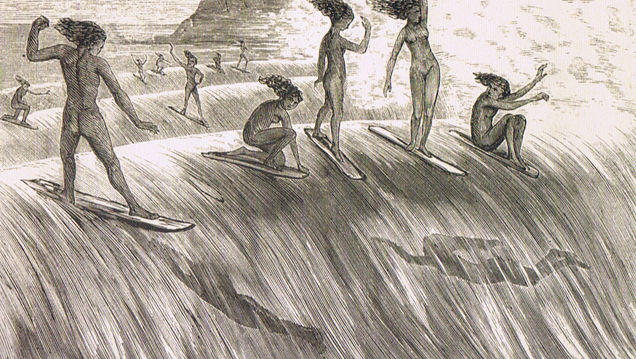 There is no written or recorded history as to where the art of wave riding or the sport of surfing began. It is however well accepted that the sport was spawned out of the Pacific, although exactly where is up for debate. The Peruvians claim that their earlier decedents nearly 4000 years ago were the first to ride the surf, either standing or on their knees as they brought their fishing crafts made of reads in on the waves after spending time at sea. However the commonly accepted theory of the origins of surfing dates back to the migration of the Polynesian people from Sumatra in Indonesia, spreading through Fiji, the Marquesas, Tahiti and eventually Hawaii. What remains as an excepted fact is that Hawaii became and remains surfing’s world epicenter.

In 1778 we have the first recorded written history of the sport being observed by Captain James Cook’s third expedition to the Pacific on his ships, HMS Discovery and Resolution. History tells us that they stopped at the end of the island chain on their way from Tahiti to the Northwest coast of North America. Captain James Cook and his crew were in search of a passage from the North Pacific to the Atlantic but to their dismay were unable to find an actual route. Upon their return to the North Pacific they stopped of at Kealakekua Bay on the big island of Hawaii . It was there that Cook was killed by the locals when he made a failed attempt to kidnap the islander’s high chief to force the return of a stolen boat.